Thought 1: The Contested Convention Market Could Come Down To A Technicality

PredictIt's contested convention market states “This contract shall resolve to Yes in the event that more than one ballot of the presidential roll call at the 2020 Democratic convention will be required to decide the Democratic nominee for president.”

Nate Silver has a feature on the possibility of a contested convention but in a nutshell one thing to keep in mind is that the pledged delegates do NOT have any legal obligation to do anything. 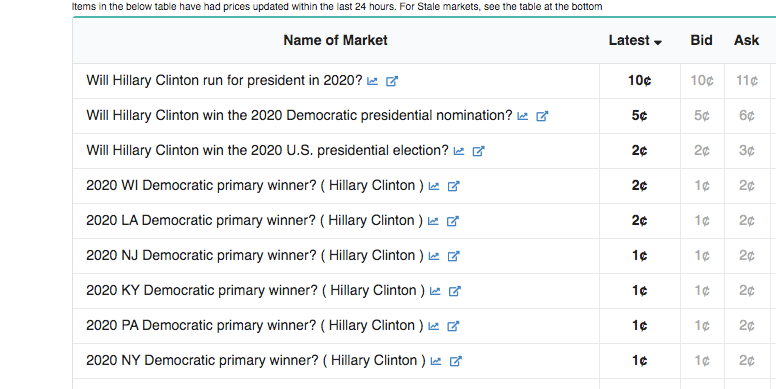 Notably you can sell yes shares for a penny or less in all state primary/caucus markets indicating that traders somehow think Hillary could get the nomination without entering the primary (perhaps in a contested convention).

Thought 3: The One Yang Market That is Not Overpriced

Andrew Yang is a trading at 3¢ for being the VP nominee.

Unlike other Yang markets (6% chance for nomination), I actually think that is pretty reasonable given that his strength with young voters and independents would be a solid choice for the front-runner (Biden).

Don't take my word, for it.

Here is MSNBC's Stephanie Ruhle (at the 3:20 mark)

If the democratic nominee is a more traditional candidate like a Joe Biden, does Andrew Yang make a viable VP option?

Here is Meghan McCain on The View

You’re my dark horse VP pick, I’ve seen some pictures of you and Joe Biden…and you guys look pretty cushy

Yang has also seen impressive growth in his favorability ratings among Democrats. According to the recent January 2020 Monmouth poll, Yang's net favorability among Democrats is +35, ahead of Amy Klobuchar and Pete Buttigieg, and much better than -1 in May 2019.

Disclosure: I am long Yang VP shares and short some of the other VP candidates.